Inspired by The Land , The Sill, Hadrian’s Wall, January, February 2019

Cathy was a member of a selected Group exhibition at the New Gallery at The Sill about artists inspiration from the landscape of the Northumberland National Park and its environs.
​

Cathy was delighted to be selected for Printfest in May 2018 at Ulveston in the Lake District. She had a very busy time and really enjoyed the atmosphere and meeting other talent d printmakers from around Britain. 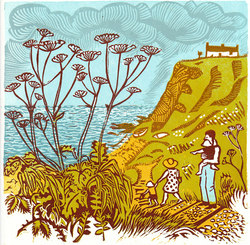 November 5th 2014 - February 2nd 2015
Group exhibition of Printmakers, Calligraphers and Bookbinders. Cathy shows her most recent linocuts.
Please note: Baliffgate Museum is closed every monday but open on saturday and sundays. The Museum is closed for Christmas from 14th December to the 13th January 2015.

August 15th - 17th 2014
Exhibition in Cathedral Crypt of Cathy's linocuts . Other artists exhibited throughout the Cathedral. There was the auction of her print "The Sparrows" as part of a fund raising event with other artists, in aid of the Cathedral. 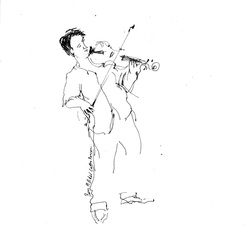 May 9th - 11th 2014
Exhibition of last year's sketches in The Circle Gallery, The Theatre by the Lake , Keswick and sketches of the 2014 Jazz Festival on show to the public.

Much ado About Nothing, Queen's Hall, Hexham 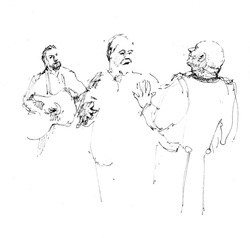 April 7th - 23rd May 2014
Exhibition of Linocuts based on sketches from Cathy's residency with Kim Lewis at Lancaster Castle, demi-paradise theatre production.

Much Ado About Nothing, The Theatre by the Lake, Keswick 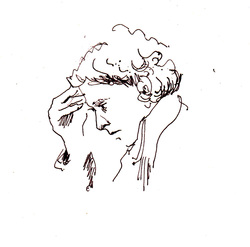 September 5th - Ocober 8th  2013
Exhibition of the sketches and linocut prints from Cathy's residency with Kim Lewis during a demi-paradise theatre production of Much Ado About Nothing. (See Residencies page)

August 13th - 6th October 2013
Cathy was included in a group exhibition of work by selected printmakers, held in the Gallery of  Farfield Mill . This is a thriving Art's Centre and Museum in a converted Woollen Mill near Sedbergh, in picturesque Garsdale. 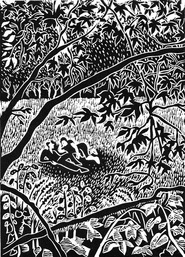 May 3rd - 5th 2013
Cathy was delighted to be selected for this prestigious event. Printfest is the only Art Fair specifically for Printmakers . She had a successful time there, making many new friends from other exhibitors and speaking to interested members of the public. 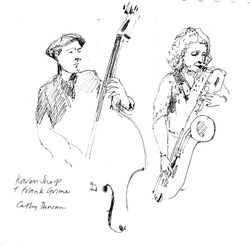 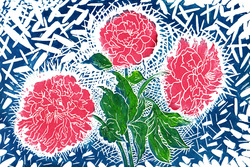 Spring 2013 Cathy was part of a group exhibition in this beautiful Arts and Craft House which is a Church of England retreat. 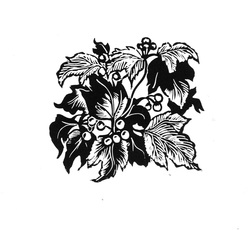 Spring 2012 "Through the Garden Gate" was an exhibition of poems, prints, drawings and
ceramics inspired by a secret garden in  Newcastle city; Mooorbank Botanical
Gardens. Cathy was exhibiting along with fellow artists Kim Lewis, Linda France,
Bridget Jones and Sue Dunne at The Robinson - Gay Gallery,
3a Market Street Hexham.
More of Cathy's work can still be seen at the Gallery throughout the year. 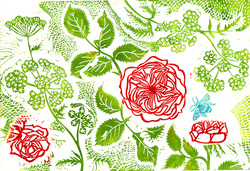 Cathy's studio is also open outside of these dates  so please come along to The Hearth
and see her  work. 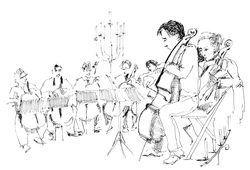 Hexham Abbey Festival . See My Residencies page for pictures. Original drawings of all the performers in this year's Abbey festival. Drawn as Cathy watched and listened to their musical performance. 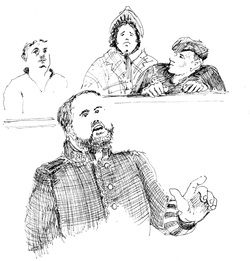 Autumn 2012 Much Ado about Nothing, a demi-paradise production.
caworked with    Kim Lewis  (the other  Artist in Residence) drawing the production team in rehearsal at Lancaster  Castle during February and March of this year. The play was later performed to
great acclaim. Cathy's drawings were exhibited during   The British Shakespeare  Association conference held in Lancaster University .  An exhibition of the  work  was to be shown at The Dukes Theatre, Lancaster from 16th October to 26th  October 2012.